skip to main | skip to sidebar

The Second is Nov 26th a Flat Earth Agenda show. Live looped Bass and Drums duo. Scott Hafferkamp is sitting in on drums for the evening. We're opening for Tropic Bombs.

I am movin' on up! I have a shiny new website! No longer will I be relegated to the backwaters of the Faceybooks and Tweeters. No more shall I have to answer the question "Do you have a website?" with shame and give a Reverbnation page or be looked upon with derision with the mere mention of Myspace.

For I have a new Website!! Go forth...browse... contact me...tell me your thoughts about Basketcase 2. Lets converse on the wonders of giant monsters...Or book a gig...or talk about bass...or talk about how awesome blood red moons are!

Oh and the Flat Earth Agenda Album is finished. Artwork and packaging to be determined. Soon my monkeys....soon

Posted by Unknown at 7:18 AM No comments:

I'm a bad blogger... Apologies.... Kids, School and Work tend to take presidence over blogging, but here's some exciting news!

Check out a sampler of BLOMP! here:

New vid of Dave and I as Flat Earth Agenda:

I have a new Skjold offset '92 Sixstring Bass!!

I did a video talking about it. I recently had it in the studio and I am VERY happy with this bass. The preamp is incredibly versatile and it feels great and is great to play.
Pete makes a fantastic bass. Below are some pics and the vid. Some details about the bass:

I suggest using headphones to really "hear" the bass. Even though youtube compressed the audio, I think the sound of the bass still comes through.

The control boost the mid and cuts the mids and is sweepable from 250hz to 2,5Khz, when you cut the mids it also boosts the treble and bass ranges which follow the frequency band as you turn it so it becomes a variable contour.

The bottom knob is the sweep and varies the sound quite a bit. Sweeping that lower knob in the cut mode will give you about three different useable slap tones and the boost function will give you a lot of possibilities when playing fingerstyle.


Steven's music can be heard and he can be contacted at the following sites:

House Concert... and some music...

It's been a while... I know.  Here are a few things that are going on

I am pleased to announce that we will be hosting a house concert for Bassist Trip Wamsley.

Trip's playing takes on both the rhythmic bass and melodic lead roles, harmonics and overtones are flung about effortlessly. Right hand, left hand, all ten fingers, tuning keys and every ounce of potential is used to bring forth music from his finely crafted instruments. Musicains will appreciate his creative use of both fretted and fretless basses, special effects and detuners. Trip is the introduction to the bass guitar as a complete orchestra.

A $10 donation is suggested.

What's a house concert you ask?

A house concert is a chance to experience live music in a warm and intimate environment. It's when someone opens up their home and invites you into their living room to share in a performance by one of their favorite musicians. It's a chance to meet the performers and get them to sign and personalize their CD. A house concert is also a great social evening with friends and neighbors.

Dave and I will also open the nights event.


A full Bio on trip can be located here: http://www.instituteofbass.com/archive/bass_faces/trip_wamsley/


Anyone in the Toledo Ohio area contact me for location and time.

Also... Dave and I are halfway through our follow up full length under the name Flat Earth Agenda.
Here is a sample of what's going to be on the album. I suggest using headphones as laptop speakers will not pick up the low end. This track is also not mastered and is not hard limited.

More soon
Posted by Unknown at 12:06 PM No comments:

One Day Of Bass

Greetings Humans....Get comfy... This post is a bit long.

There were 10 Bassists and their bands present at this years One Day of Bass in Chicago. This event was brought to you by Jauqo III-X and New Life Portage Park....and the letter B. This was an all day event. We got there at 1pm and left after 10pm.


Let's get started shall we

First up was Ian Zamost and his drummer with some rockin' effects heavy slap. Nice way to start the days event. 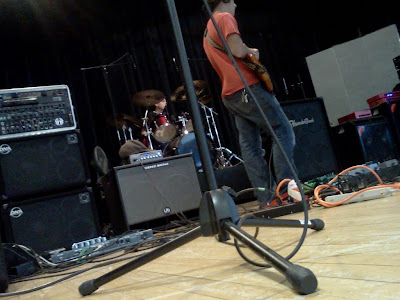 Next we had Tim Siesser and his band. For some reason I have no footage of this set. Which is a shame...This is one tight act. The melodies present were wonderfully pleasing. I do have a pic though. 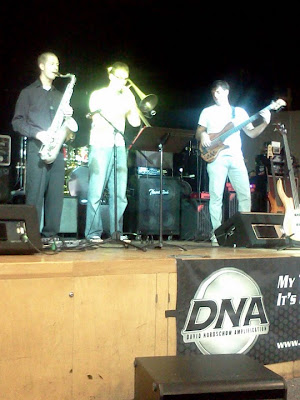 Bill Clements was insane...figuratively....He did appear to be in his right mind. Apparently he and his percussionists Were winging much of the set and damn that's brave and amazing. It was rather stunning to witness. 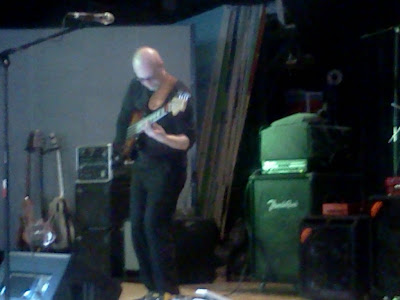 Apologies for my phone camera....I do however have a clear picture of Bill's Lakland and his boots: 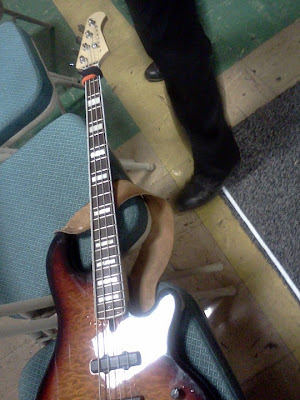 Will Howard was smooth and mellow...compared to the high energy of bill...He told a story about one of the basses he was playing. He picked it up at a garage sale for 100 bucks. This is not the 100 bass... It's on the stand next to him glowing... 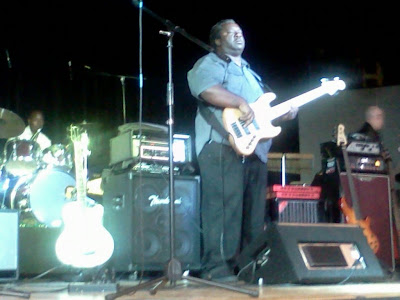 Dave and I played after Will. It was HOT on that stage. Minimal mishaps...so that's good. I played through a Genz Benz streamliner 900 paired with a 210 ubercab for the first time and I was really impressed. I had to turn some of the low end down! I basically ran it pretty flat, mostly because I can get a lot of the tone I need from my Skjold Bass. couple that with the fact that I loop... some of the cabs I've used seem to have a hard time with all the layers that I use. I detected no issues from this rig. I was very impressed. I wanted to try out he Overton amps and cabs that were there but didn't get a chance to... So I can't comment on them other than to say they sounded good when the other performers used them. 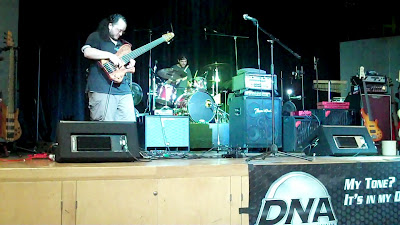 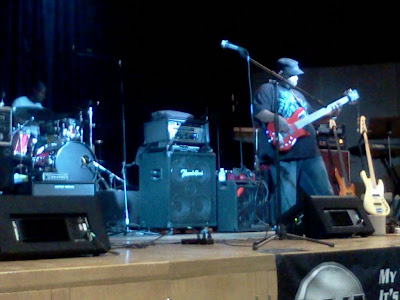 Michael Cybulskie "Big Mikey C" was very impressive indeed. He uses a short scale Watson bass. I believe he said it is 30.7 scale. That man can play! He's tight...very good stuff here. Did some Rocco Prestia stuff and some Jaco and a solo piece as well. Was very happy to have seen this. 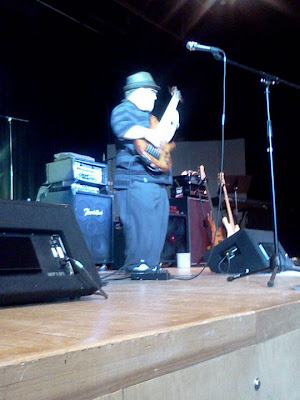 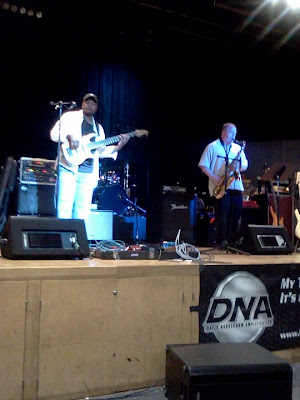 Jauqo III-X played his signature Avant-Funk with his band. Another apology for my camera phone... Had to get this one while plugged in from the back of the room: 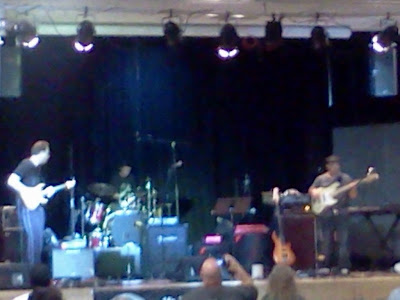 Quintin Berry blew us all away...He has a very unique way of playing the bass. He also had everyone gather around the stage....that was great. by the end of the night everyone had spread out and he made the evening intimate...My Drummer even got to perform with Quintin through some Kings X and Jimy Hendricks. A wonderful way to end the night. 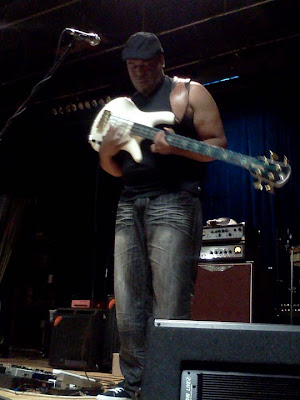 Many thanks to Jauqo II-X and New Life Portage Park for putting on the show. thanks to the sponsers, Genz Benz, DNA Amplification, Overton Amplification, Thunderfunk and Ashdown. Skjold Design Guitars, Specter basses, Lakland basses,HJC Customs for providing a custom build for the raffle, DR Strings ... good lord I know I'm forgetting some... You can dig on the flyer here...the sponsers are listed: 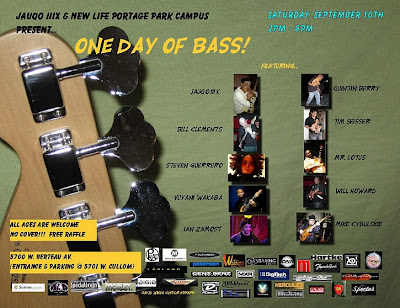 I'd have to say the biggest thing I learn from these events is to Breath... Relax...do your thing. Because ultimately everyone is so different in approach from player to player, even if they are similar in genre.


And now for some video:

Drummer Dave Kontak will be joining me in Chicago Sept 10th with many amazing bass players for ONE DAY OF BASS!!!

The Flyer is posted here...steal and disseminate as you will. 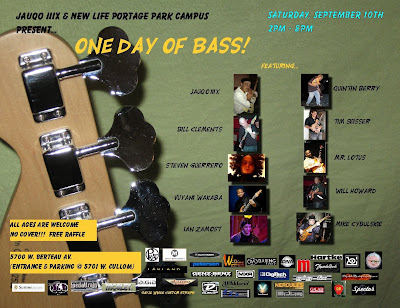 Other places to find me

Places To Buy My Music